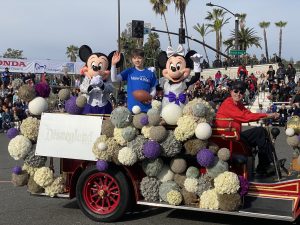 Together, Disney and Make-A-Wish® made some magic for Tennyson Erickson, a 2018 Make-A-Wish kid and cancer survivor, at the 134th Rose Parade on Monday, January 2, 2023, in Pasadena, California. Tennyson joined Mickey Mouse and Minnie Mouse on the Disneyland Fire Department engine on the parade route and helped the dynamic duo deliver the iconic ceremonial first pass for the Rose Bowl Game. As viewers of television coverage of the parade saw, the pass magically soared from the Rose Parade to Disneyland Resort, then over to the Rose Bowl Stadium, where the 109th Rose Bowl Game was played later that day.

As part of ESPN’s My Wish series in 2018, Tennyson and his family traveled from South Dakota to Arizona, where he met his all-time favorite player, former NFL star Larry Fitzgerald, and spent two days at the Arizona Cardinals’ minicamp. He even signed an NFL contract.

Now a happy and healthy 12-year-old, Tennyson showed off his love of football once again ahead of the renowned Rose Bowl Game.

“As a long-time Cardinals fan, Tennyson’s wish was something he’ll never forget, and we still talk about it regularly and keep in touch with many of the people we met along the way. Make-A-Wish will always hold a special place in our hearts, and I was so proud and emotional to see Tennyson representing the organization alongside such a great supporter in Disney,” shared Tennyson’s mom, Diana.

Since 1980, Disney and Make-A-Wish have granted more than 145,000 wishes for kids with critical illnesses worldwide. Historically, half of all wishes granted in the U.S. are Disney wishes and involve all parts of the Company, including theme park and resort vacations, cruises, shopping sprees, studio visits, talent meet-and-greets, sports-themed experiences—like Tennyson’s wish—and more. Adults who are wish alumni and parents of current wish kids say that the wish marked a turning point for them in their treatment — giving them strength, joy, and a greater sense of hope for their future.