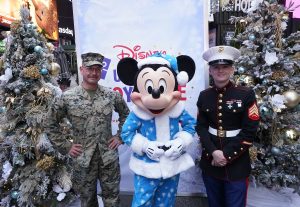 In celebration of the Disney Ultimate Toy Drive and the Company’s 75-year collaboration with the Marine Toys for Tots Program, it was announced that Disney is providing a grant to the foundation that will deliver an additional 75,000 toys to children in need during the holiday season. The donation was announced on ABC’s Good Morning America at a Giving Tuesday volunteer activity for Toys for Tots at Military Island in Times Square, where more than 50 volunteers from the NYPD, U.S. Marine Corps, and Disney’s own VoluntEARS program were on hand to help sort toys for the organization. 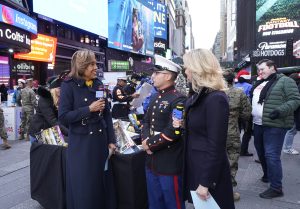 This donation from Disney brings the Disney Ultimate Toy Drive total impact to over 100,000 toys so far this holiday season. There’s still time to join the Disney Ultimate Toy Drive by purchasing a toy to donate online at shopDisney.com now through December 24, 2022, or by donating a new, unwrapped toy in person at a Disney store or Disney store outlet location, the Downtown Disney District at Disneyland Resort, or Disney Springs at Walt Disney World Resort*, now through December 12, 2022.

The relationship between Disney and Toys for Tots dates back to the program’s beginnings, when Walt Disney and his studio artists personally designed the Toys for Tots train logo that is still used to this day. Since 1947, Toys for Tots and volunteers have distributed nearly 630 million toys to over 280 million children. 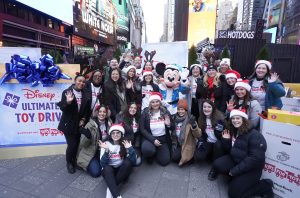 The Disney Ultimate Toy Drive aims to inspire hope where it’s needed most during the holiday season. For more information, visit www.disney.com/toydrive.