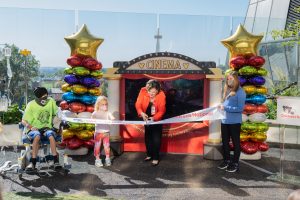 The Walt Disney Company’s dedication to bringing uplifting entertainment to audiences across the globe, including those who need it most, was exemplified in an Encanto-themed event at Children’s National Hospital (CNH) in Washington, D.C., on October 11. The event, held in collaboration with the Starlight Children’s Foundation, a nonprofit dedicated to delivering happiness to seriously ill children and their families, introduced a new suite of Disney experiences at one of the nation’s top-five ranked pediatric hospitals while also honoring Hispanic Heritage Month.

It was the most recent example of the Company’s five-year, $100 million commitment to help reinvent the patient and family experience in children’s hospitals across the globe through interactive installations, murals, and play spaces. The goal is to draw children into the vibrant worlds of Disney storytelling and provide joy and comfort during an otherwise anxious time for kids and their caretakers. Disney also provides complimentary access to Disney+ and screenings of newly released movies on a specially designed mobile movie theater screen as part of the company’s children’s hospital initiative. Additionally, Disney-themed Starlight Hospital Wear, care packages, and products delivered by Starlight Children’s Foundation further allow patients to brighten and personalize their hospital stays. The Walt Disney Company supports more than 700 hospitals worldwide through its children’s hospital initiative.

During the event at CNH, Disney and Starlight Children’s Foundation unveiled new experiences to reimagine the patient journey. To celebrate, patients and families enjoyed an Encanto-themed event that included a ribbon-cutting ceremony, a special video message from voice talent from the Academy Award®-winning movie, an Encanto sing-along with a CNH music therapist, Encanto-themed products curated by Starlight, the chance to draw characters from the film with a Walt Disney Animation Studios artist, and a screening of Encanto on the Disney mobile movie theater screen. Families also received Encanto-themed products, including toys, games, books, and costumes, curated by Disney and Starlight.

“Through these interactive murals and windows… installed throughout our hospital… our patients are able to connect with a little piece of home, which is really special,” said Claudia Pereira, a certified child life specialist at Children’s National, during the event earlier this week in the hospital’s Bunny Mellon Healing Garden.

“Events like this are super special because patients typically aren’t able to come out of their rooms to interact with one another, have special giveaways, watch a movie in their free time at the hospital,” Pereira added. “[They] bring people together and let life feel a little bit more normal rather than just being surrounded by hospital walls and being in a hospital room.” 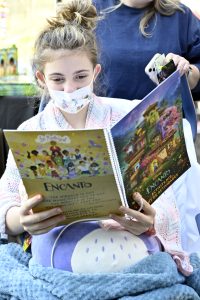 Adam Garone, CEO of Starlight Children’s Foundation, concurred. “Transforming the hospital experience is core to our mission at Starlight of delivering happiness to seriously ill kids and their families to help reduce the stress of hospitalization and medical procedures. Moments like these bring a little joy to young patients when they need it most,” he said. “We’re incredibly grateful for the longstanding relationship with Disney and Children’s National Hospital and for their support in helping us bring our mission to life.”

Garone noted that the child life teams at partner hospitals provide Starlight’s state-of-the-art programs—including Starlight Hospital Wear and Starlight Deliveries of toys and games—free of charge to more than 800 hospitals and healthcare facilities nationwide. These programs act as distraction tools to help young patients get through the stress of serious illnesses and hospitalization.

For Danielle Reeves, a parent whose child has been treated at the hospital for several years, the event and the offerings provided by Disney and the Starlight Children’s Foundation have eased some of the stress and difficulties for their family. 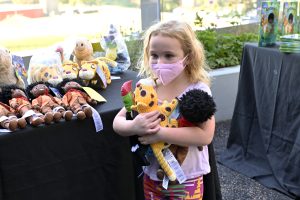 “We were really excited to come because we love Disney. We come to Children’s once a month and it’s been really helpful,” said Reeves. “Especially when siblings are here, too, to have the extra entertainment. Disney is pretty solid for our family because there’s something everyone loves about Disney here… It makes the long drive, and the long hours here feel more positive.”

In honor of Hispanic Heritage Month, Starlight will offer the Encanto-themed products that the patients enjoyed at the CNH event to its nationwide network of healthcare partners through the Disney Deliveries program. A plan for a new collection of Encanto-themed hospital wear was also announced at the event, and patients nationwide will be able to dress in their favorite Mirabel, Isabela, or Antonio hospital wear in 2023.