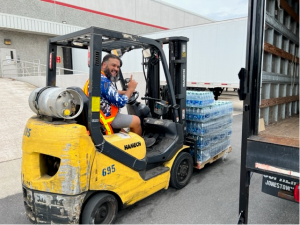 From delivering emergency supplies to the local community to pitching in to clean up, cast members members took care of resort guests and one another

Before Hurricane Ian made landfall in Florida last week, cast members across Walt Disney World Resort worked around the clock to prepare theme parks and resort areas for the storm. From securing outdoor areas for safety and protecting the many animals at Disney’s Animal Kingdom, to packing thousands of meal kits for guests staying in the resort’s hotels, to donating and delivering emergency supplies to the local community, cast members came together to take care of guests and one another.

Donald Drasheff, director of Disney’s Buena Vista Construction Company at Walt Disney World Resort, led teams to prepare the resort area and take part in clean-up recovery after the storm with the help of a large team of tradecraft workers.

“We are able to respond very quickly when there is a crisis like this, to handle everything from filling and delivering sandbags, to taking down props and awnings, to strapping down merchandise and food and beverage carts, to boarding up LED signs,” said Drasheff, who worked as an engineering manager at the parks for 11 years before joining Buena Vista Construction Company six months ago.

To provide meals for the tens of thousands of guests and fellow cast members who hunkered down at resorts, the team sent trucks to pick up food in Tampa, since food deliveries were halted in advance of the storm. The team also donated and delivered emergency supplies to Central Florida nonprofits, including the Salvation Army in downtown Orlando and the Osceola Council on Aging.

The Walt Disney Company is contributing millions of dollars in support, including providing assistance to cast members and employees affected by the storm through the Company’s relief fund and support to charitable partners such as the American Red Cross, Feeding America, Heart of Florida United Way, and others working on local relief efforts. The Company’s support includes direct cash as well as in-kind donations, on-air appeals for public support, and other resources.

Meanwhile, during the storm, thousands of cast members stayed on-site for two days throughout Hurricane Ian as part of ride-out efforts to care for guests and to staff key park operations. Katie Leighty, animal care director for Disney’s Animals, Science and Environment team, along with 50 cast members from her team, were among the crew who remained on-site. 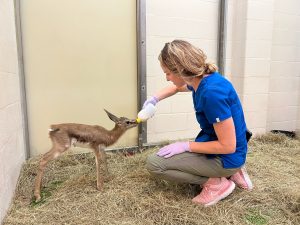 Leighty, a 17-year Disney veteran, described the preparations for the many species that reside at Animal Kingdom as “similar to what you would do at home,” which included stocking up on food for the animals. Cast members who remained on-site also assessed and removed potential hazards, like low-lying tree limbs, and determined where animals would be safest and most comfortable through the storm.

“Some animals prefer to be outside where they can see their surroundings. Antelopes, for example, can spook easily in a storm,” Leighty said. “A lot of animals can just hunker down out on the savanna and do really well. We’ve studied their behavior over the years to know what’s best for them.”

Other animals were housed in on-site barns to keep both them and the cast supporting them safe. During lockdown, animal care cast members stayed overnight to watch over the animals, maintain security, and monitor the storm’s impact from 12 locations across the parks.

“We set up cots and air mattresses. Everyone brought snacks. Everyone was just in great spirits the whole time. It’s definitely seeing your cast members in a different light,” Leighty said with a laugh. “One of the unique things that we always talk about at Disney Parks is how we all come together to get through challenges and take care of each other. Those moments when we come together are always special.” 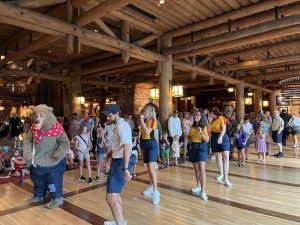 For guests who needed to shelter in place at Disney Resort hotels, cast members raised the bar to provide both meals and other necessary support. More than 40,000 meal kits were assembled by more than 65 cast members, while guests were kept in good spirits with experiences that were uniquely Disney. Resorts set up temporary movie screens in hotel lobbies, hosted pop-up character appearances and dance parties, offered unlimited free arcade games, and arranged trivia contests for guests of all ages to enjoy.

Leighty added, “It was great to see everyone pitching in and doing whatever they could,” which included cast members at all levels of the Company. “I saw our head of custodial out there raking the park. She’s the executive in charge, and she still jumped in to help clean up for both our guests and the animals. It’s just super cool to see everyone out there for the common cause.” 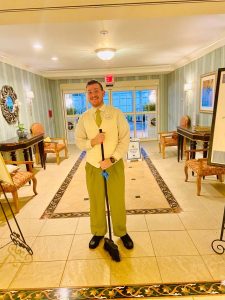 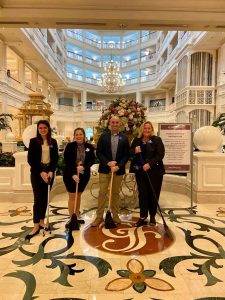 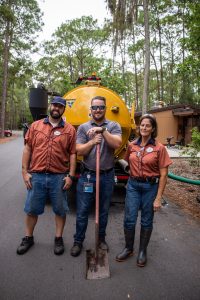 For Daniel Auster, a concierge at Disney’s Grand Floridian Resort & Spa, it was emblematic of a culture where cast members are encouraged to “be in the story.”

“People were being so positive. The ways that we were able to create magic for all of our guests in such a difficult and stressful time are things that you don’t see anywhere else,” said Auster who, prior to his current role, took part in the Disney College Program while earning his BS in Hospitality Management from the University of Central Florida.

Clean-up efforts by Auster inspired a viral challenge among other cast members after an image of him sweeping up debris was posted on an internal communications channel. Cast members throughout the resort followed suit—sweeping up after the storm and documenting their own post-recovery work as part of a cast member “broom challenge.”

The combined efforts of cast members at all levels of the Company enabled Walt Disney World Resort to reopen safely after closing for two days.

“Teamwork is how we run our business. We spend so much time together that it really feels more like a family,” Drasheff said. “We build a lot of trust and credibility amongst each other and when it’s time for the team to step-up, there’s no ifs, ands, or buts. We’re ready to go. We’re willing to do whatever it takes.”