New Disney Parks ‘it’s a small world’ Dolls Brought to Life by Imagineers, Cast in Spirit of Diversity and Inclusion 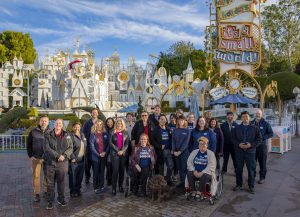 Just in time to mark the 25th Anniversary of “it’s a small world” Holiday, the beloved Disneyland Resort attraction welcomed two new dolls in wheelchairs to further recognize diversity and inclusion in the iconic celebration of children across the globe. 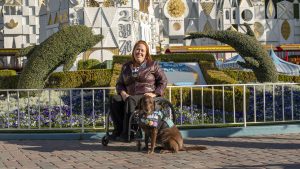 “This is the first time someone like me is represented in an attraction at the Disneyland Resort,” said Accessibility Manager Erin Quintanilla, who also serves as co-Chair of the ENABLED Business Employee Resource Group (BERG) that advocates for people with disabilities. “It’s a really big deal and this could not have happened without the amazing teams involved.” 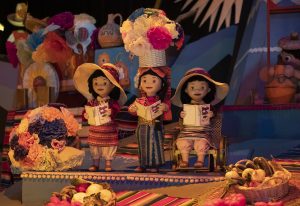 From design to installation, Imagineers worked closely with Resort Enhancement, Animation, Wardrobe, and the ENABLED BERG. “We designed this wheelchair very much in the Mary Blair style and worked with the various [partners] to create the filigree and floral motifs … to make sure [the design] fit in with the attraction,” said Kim. Disney Legend Mary Blair is known for her distinctive artistic style used throughout the attraction. 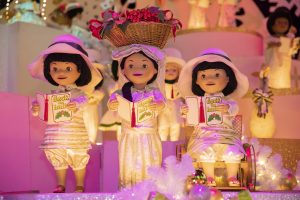 The doll represents a Latin American child in a wheelchair and is featured in both the Latin America region and finale of “it’s a small world.” The costume design stemmed from the late Alice Davis, who made her legendary mark on the attraction through her authentic designs that represent the diverse regions. 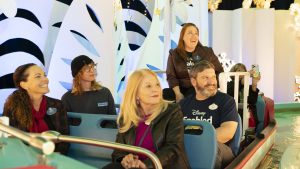 Erin shared how proud she was to work on the project to bring authenticity to the art, which is part of what BERGs do at the resort. “I was able to help consult on the design of the wheelchairs so that the dolls authentically represented those of us who live life on wheels,” said Erin. 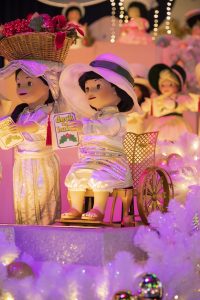 From the bend in the child’s knee, to the push rim on the back of the wheels, each component authentically represents how a child independently uses a wheelchair. “It’s also critical that the dolls move just like everyone else in order to be fully inclusive,” added Erin. 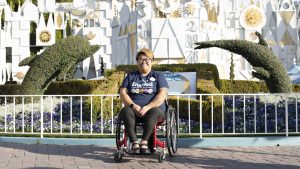 Fellow ENABLED BERG member and Guest Relations Hostess Sarah Nguyen was surprised when she saw the dolls for the first time. “When I was a child, I didn’t see any representation of people that looked like me, and it became normal for me,” said Sarah. “I never thought as an adult that I would see something that represents me so accurately, and I didn’t realize how important it was until I actually saw it. It shows that I matter.”

As the ENABLED BERG provided the authentic voice, Resort Enhancement team members collaborated on the design. 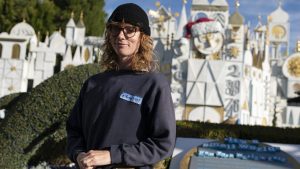 “I approached this project through research to understand how someone accurately uses a wheelchair,” said Park Decorator and Designer Cassandra Siemon. She said the ENABLED BERG’s partnership was essential to the authentic representation.

“It’s important that all of the right people and teams are included in the design process,” said Cassandra. “It became important that we all wrote this story together.”

“We say the park is for everyone and it’s essential that all of the specific details and elements in the resort are for everyone,” said Cassandra. 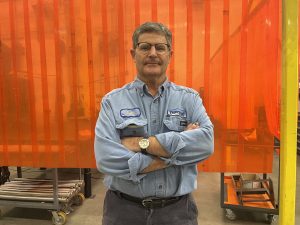 Welder John Cunningham was the lead builder and describes how impactful working on a project like this was for him. “It’s fascinating for one thing because it’s a challenge. There’s never been another wheelchair to work with, so we had to build it from scratch,” said John. “But it’s also important. It’s not just decorative, it’s symbolic. And I felt that a little bit when I was working on it. It’s something I’ll always remember as one of those Disney moments.”

“It’s always amazing to see a project develop from concept design to the final installation,” said Walt Disney Imagineering Producer, Michele Hobbs, who was an ongoing part of the process. “The emotion and sheer dedication by everyone involved was inspiring. It is so meaningful for Walt Disney Imagineering and our Disneyland Resort cast members. We know our guests will find it equally incredible.”

It is anticipated that dolls in wheelchairs will be added to the “it’s a small world” attractions at Walt Disney World and Disneyland Paris in 2023.