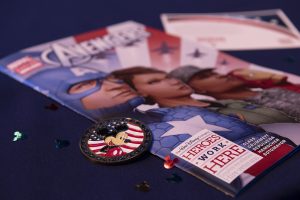 The Walt Disney Company celebrated the 10th anniversary of Heroes Work Here, an innovative hiring program that has led to the onboarding of more than 12,500 veterans throughout the Company. Launched in 2012 at Walt Disney World Resort, the program is dedicated to hiring, training, and supporting U.S. military veterans, while elevating awareness of their tremendous value as civilian employees. The program quickly surpassed its initial benchmark of providing at least 1,000 jobs and career opportunities for veterans by 2015—a goal that was met in less than a year—and continues to support veterans transitioning to the civilian workforce at Disney and beyond.

“The Walt Disney Company is proud to celebrate the 10th anniversary of our Heroes Work Here program, which has seen us hire more than 12,500 veterans since it was established in 2012,” said Latondra Newton, Senior Vice President and Chief Diversity Officer, The Walt Disney Company. “The program is designed to recognize and honor their sacrifice and service and offer opportunities for veterans and military spouses as they look to build meaningful careers following their military service. Many of them have helped us continue to build and enhance the program with new ideas and innovative ways we support veterans at Disney.”

The success of Heroes Work Here prompted Disney to launch the Veterans Institute in 2013, a series of complimentary events designed to help companies enhance their recruiting, training, and development of veteran talent. Bringing together veterans, business experts, government officials, and leaders of veteran nonprofits, the Veterans Institute provides a forum for sharing best practices in hiring veterans and military spouses, as well as networking and advice for a successful transition from the military to the civilian workforce. In all, seven summits have been held across the country, with the most recent one presented by Disney Institute and the Wounded Warrior Project on August 19–20, 2022, at Walt Disney World Resort. That same month, Disney welcomed hundreds of elite athletes from the U.S. military and allied nations at the 2022 Department of Defense Warrior Games.

“We were thrilled to welcome the return of Veterans Institute Summit this past August,” said Cappy Surette, Senior Manager, External Communications, Disney Parks, Experiences, and Products; a retired U.S. Navy Captain, and a founder of the Disney SALUTE Veteran Business Employee Resource Group. “During this inspiring event, we shared our learnings with other organizations interested in developing or enhancing their veteran-hiring programs. We’re honored to continue this important work and announce that anyone can now register for complimentary access to view an On-Demand Replay of the Veterans Institute Summit on the Disney Institute webpage.”

Jared Lyon, President and CEO of Student Veterans of America—which has partnered with Disney’s Heroes Work Here program since its inception—said, “In addition to consistently supporting veterans and military families with hiring, Disney has been a champion of nonprofits focused on veteran transition and empowerment. And by sharing unique insights offered to employers around the country, the Veterans Institute promotes an open exchange of best practices in creating corporate cultures that are truly inclusive of veterans and military families.”

Disney further committed its support of veterans and their families in 2015 with the creation of Heroes Supply Here, a company-wide endeavor to increase Disney’s spending with businesses that are owned by veterans, including service-disabled veterans. By working with entrepreneurs and business owners who are veterans, the program has increased Disney’s spending with veteran-owned businesses from less than $0.1 million in 2014 to approximately $6.4 million in 2022.

“Disney is a company that enthusiastically reaches out to veterans, letting us know we have a part to play. Being part of the Disney family has really made a difference as I’ve transitioned from the military to the next chapter in my journey,” said Ariel Elias, Manager, Supplier Diversity; a retired Marine Corps Warrant Officer and former participant in Disney’s military fellowship program.

Disney’s history of appreciation for military service began with the Company’s founders, who both served during World War I: Walt Disney was a driver in the Red Cross Ambulance Corps, and his brother Roy Disney was a petty officer in the U.S. Navy.