How ‘She-Hulk’ Is Embracing On-Screen Sustainability

For nearly a century, Disney has found inspiration in the wonders of the world we share and taken action to support a healthier planet for people and wildlife around the globe. We call these collective efforts Disney Planet Possible — tangible actions we’re taking to put possibility into practice and inspire optimism for a brighter, more sustainable future.

At Disney Media & Entertainment Distribution, we’re helping change the course of our planet’s story by embedding sustainable practices in our streaming services, networks, and facilities as well as sharing stories that raise awareness, inspire action, and support the organizations making a difference around the world. 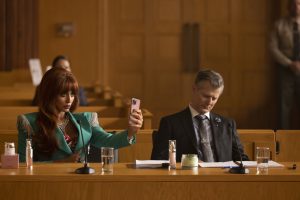 She-Hulk: Attorney at Law is going green in more ways than one. Along with its titular superheroes, the Disney+ show is also embracing sustainability thanks to executive producer Kat Coiro, who directed six of the series’ nine episodes.

Coiro teamed with environmental nonprofit Habits of Waste to take pointers from their “Lights, Camera, Plastic” campaign, which aims to avoid single-use plastics on screen, replacing them with reusable and eco-friendly items.

For She-Hulk, “I just tried anytime I could to eradicate single-use plastic from the screen — that meant if characters are having lunch outside the office, instead of having to-go containers, I would make sure that they had reusable containers; it meant instead of plastic water bottles, using Hydro Flasks throughout the show,” Coiro told The Hollywood Reporter. She notes that the first episode of the series heavily features She-Hulk (Tatiana Maslany) and her cousin Hulk (Mark Ruffalo) eating from a plastic bag of Cheetos: “Obviously that’s such a big part of the story so that’s not something that we were going to change, but pretty much everything else is plastic-free in the show.” 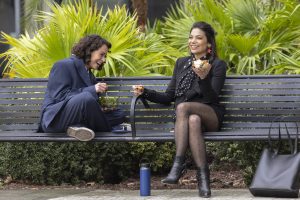 Coiro had a key partner in her environmental efforts in Ruffalo, who is a major climate activist; she first realized his passion when the two were on set working on a scene showing the Hulk’s pantry, which, in reference to the Cheetos scene, was stuffed with junk food: “He took one look at it and he said, ‘Oh, no, no, kids will be watching this, we have to put healthy things in Hulk’s pantry.’ So we swapped out all the potato chips and blue dye no. 17 items with tuna fish and beans.”

“He understands the power of the media and he understands what it means to put these images on the screen, especially on a global level, and how it does affect people,” Coiro said of Ruffalo. “And that really is the underlying philosophy behind ‘Lights, Camera, Plastic,’ is that what we show on the screen influences people, subconsciously it influences people’s choices.”

“The more we can all interconnect and the more we can all work together, I think the more of a difference we can all make,” she says, adding the importance of using a mythical world like She-Hulk to share these sustainable messages. “We want to eventually build a real world that doesn’t include excessive waste, so why not start with the little world that we build on the screen?”