On Land, At Sea, and In the Sky – Disney is Protecting Our Natural World as a Part of Disney Planet Possible

If you’ve ever stargazed on a clear, crisp night or marveled at the shimmering sea, you’ll agree that it’s impossible not to be impressed by the beauty and grandeur of our natural world. Disney’s conservation teams are working with nonprofit organizations and communities worldwide to restore nature and create a world in balance – on land, under the sea and across the sky.

How We’re Protecting Wildlife on Land:

Through the Disney Conservation Fund (DCF), we support nonprofit organizations like Save the Golden Lion Tamarin and Associação Mico-Leão-Dourado who collaborated with Disney Imagineers and other stakeholders to create the first wildlife overpass over a federal highway in Brazil that connects forest habitats for endangered golden lion tamarin monkeys and other wildlife.

DCF is also proud to support rhino conservation efforts in Kenya and Indonesia and has provided nearly $3.5 million to protect rhinos in the wild. Recently, work we supported through the International Rhino Foundation has led to the birth of a Sumatran rhino calf at the Sumatran Rhino Sanctuary in Way Kambas National Park, Indonesia. This milestone represents incredible efforts by the Indonesian government, International Rhino Foundation, and partners to recover this critically endangered rhino species through years of planning, global partnership, and training of dedicated teams.

In the Democratic Republic of the Congo, DCF and Disney’s Animal Kingdom’s animal care and education experts supported the establishment and growth of the Gorilla Rehabilitation and Conservation Education Center (GRACE), the world’s only sanctuary for orphaned Grauer’s gorillas. The loss of intact forested habitat threatens gorilla survival in the wild, but local communities also rely on natural resources like timber to meet their basic needs. To combat this challenge, GRACE has helped provide fuel-efficient stoves to more than 60 homes, planted more than 27,000 trees to provide household wood to these communities, and supported conservation education through radio programming, reaching more than 15,000 local listeners.

This year, in honor of the all-new Disneynature film, “Polar Bear,” Disneynature and the DCF continue to care for wildlife and their habitats by supporting Polar Bears International to help protect polar bear mothers, cubs, and their Arctic home. Be sure to tune in on Earth Day when “Polar Bear” will join the Disney+ family and tell the story of a new mother whose memories of her youth prepare her to navigate motherhood. 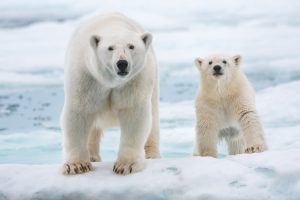 How We’re Protecting our Seas:

For some marine species, like sea turtles, life begins on land and then migrates to the sea. For this reason, Disney Team Wildlife’s 19-year strong sea turtle field conservation program at Disney’s Vero Beach Resort prioritizes the protection and monitoring of sea turtle nests.

DCF also supports long-term efforts to protect and restore sea turtle habitats, so that sea turtle hatchlings can grow up and lay their eggs on Florida’s nesting beaches. Our collaboration with the Archie Carr Center for Sea Turtle Research at the University of Florida has resulted in 2.1 million pounds of debris being removed from sea turtle habitats on beaches and at sea. Sea turtles are faithful sentinels of the ocean and protecting them will help many other marine species.

In addition to sea turtles, the DCF has supported field conservation programs for marine species in or near 50 countries worldwide. In China, the China Blue Sustainability Institute has developed the first artificial intelligence community science reporting tool to conserve the imperiled Chinese white dolphin.

Sharks and rays are also getting some much-needed conservation support through an incredible new initiative, Minorities in Shark Sciences (MISS). Carlee Jackson, a New College of Florida research associate working with Disney Conservation, co-founded MISS two years ago to create a more equitable pathway into marine science. MISS aims to ensure that everyone, no matter their background, can play a role in protecting our oceans.

How We’re Protecting Our Sky:

Through the DCF, we support organizations like the International Crane Foundation, which has helped increase protection for 19,000 square miles of crane habitats in East Asia, reach more than 80 million people with crane conservation messaging, and help increase populations of critically endangered Siberian cranes. Other DCF grantees are rehabilitating and releasing threatened bird species, restoring habitats, ensuring birds have the breeding and nesting spaces they need and empowering communities to adopt bird-friendly practices. Beyond birds, DCF supports organizations helping other winged wildlife, like the Natural History Museum of Los Angeles County, whose team is researching local bat species and engaging Angeleno youth as community scientists and conservationists for nature in their backyards.

The fund also recently recognized several Disney Conservation Heroes globally for their incredible commitment to protecting birds and their habitats.

These programs and people are where we find our many reasons for hope. Picture what’s possible with us and share your stories on social media with the hashtag #DisneyPlanetPossible to celebrate people worldwide protecting the magic of nature together.